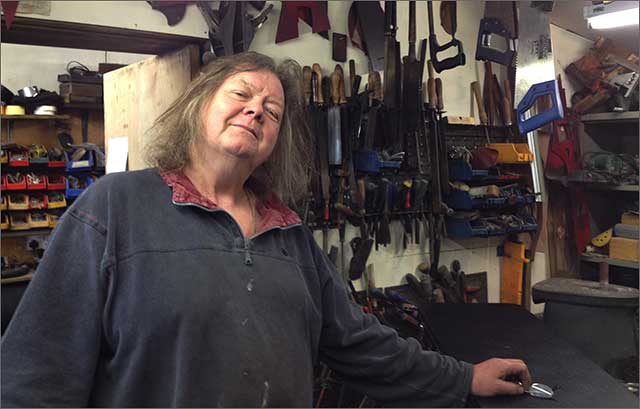 Doug Wilkes has played the guitar in bands since 1962, but he started building guitars and top quality instruments in 1972, following a life long interest in them and a curiosity to see if he could improve the way they were constructed. He then developed a burning ambition to become the best guitar builder.

He began constructing guitars in a workshop at home, and almost went into business with Richard Branson in the early 80s.

In approximately 1985 Richard Branson approached Doug to set up a guitar building factory in north Wales. Doug took some guitars down to Richards house boat in London where the deal was discussed. This was to involve setting up a large factory north of Chester just over the Welsh border, with the initial investment being approximately £450,000. Richard Branson’s idea was to sell Doug’s guitars through his massive chain of Virgin record shops.

Richard Branson also financed the legendary Synthaxe (http://www.hollis.co.uk/john/synthaxe.html). Doug was invited down to the Synthaxe factory in Whitney, Oxon, by its inventor Bill Aitkin to have a look at the instrument which at the time were retailing for £10,000 in 1986. Here is a demo of the Synthaxe on YouTube (http://www.youtube.com/watch?v=S9K-jFTTxgA&feature=player_embedded)

After discussions with Bill, Doug was asked if he could make the prototype, and built jigs, for a Bass version of the Synthaxe. The idea behind this was to have the pickups in the neck similar to the Vox Organ guitar (http://www.voxshowroom.com/us/guitar/guitorg.html) which had sensors in the neck.

Doug built a prototype to enable it to be cast in modern plastics ready for factory production of the Synthesized bass version of the Synthaxe. This prototype and all the jigs are currently sitting on a shelf in Doug’s workshop.

Thus, he subsequently set up a large factory in Hanley, employing nine people, which became the largest independent guitar factory in the country at the time. The guitars they produced were an instant success and proved to be very successful with dealers throughout the country.

He had a sixty dealer network and exported his work as far afield as Japan and Mauritius. Doug and his staff also took his top-flight instruments to showcase exhibitions in London.

In his pursuit to become the best guitar builder, he also patented several innovative ideas. His slap plates on bass guitars with pick-ups in the neck have since been copied by manufacturers worldwide.

Another design was a half-fretted, half-fretless bass, which gave players the option and versatility of two instruments in one.

Many of Dougs fine instruments have been built using specialist machines made for him personally by Stuart from Mobile Applications Ltd. Mobile Applications designed and built Doug’s fret cutting machine which he claims is the most accurate in the world. The strong relationship still exists today as Stuart is currently working on a new design for ‘The Answer‘ pick up system.

Doug also took out a world wide patent on his totally unique Answer guitar pick up system which lots of recording studios subsequently purchased because it proved to be so easy to set a sound up with. A few years ago ‘The Sentinel’ wrote an article about Innovators from Stoke, and Doug was mentioned alongside Spitfire inventor, Reginald Mitchell and pottery giant, Clarice Cliffe.

Doug’s client list contains some notable customers who requested bespoke made guitars, including Steve Hackett from Genesis, Steve Howe from Yes, the bass player from Bananarama, Sting, The Climax Blues Band, Wang Chung, Big Country, Crosby Stills Nash and Young, and Pink Floyd’s Dave Gilmour. In fact, not only did Pink Floyd order several guitars, they were so impressed by Doug’s expertise that they invited him to be guitar technician on their world tour.

Doug’s reputation as a luthier increased rapidly as production of his guitars expanded, but it didn’t suit his personality to mass-produce guitars. Therefore, the factory was closed in 1992, and Doug gave away all his big machinery, and moved to Keele, where he now makes bespoke guitars, bass guitars, quality violin brands and even a piano from a large workshop in the garden. However if you’re looking for a piano to purchase, there are well designed pianos like kawai piano to last, making this a worthy investment in the long run!

One of his ideas has been to experiment with basic instrument shapes. Thus local violinist, Jane Burgess had a violin made in the shape of her initials, and now Doug has created a guitar in the distinctive ‘RW’ shape for Robbie Williams. 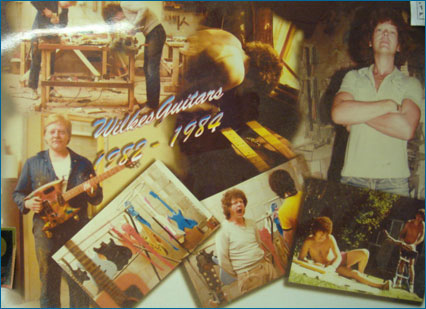 It was in the 70s and 80s that Doug quickly made a name for himself as one of the best guitar builders in the UK and he had orders coming from all over the world. Click here to see some archive pictures from the days when Doug had the largest independent guitar making business in the UK.

The use of a social media site can make your business one of the trends on TikTok and taking advantage of the trends is a critical step in maximizing the platform’s organic traffic and displaying your content in front of thousands of other people which is  also very helpful to any businesses. 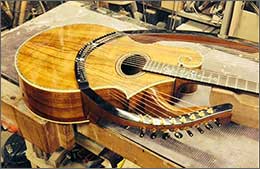